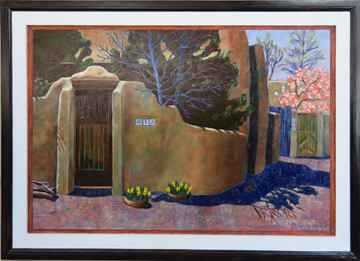 My oil paintings are representational paintings of the Southwest.  I work geometric patterns into my pieces using a relief printing process to add interest and color.
My pastel paintings strongly juxtapose organic and geometric structures.  I use intricate patterns, pastel printing and mixed media collage in contrast with realism to evoke a sense of visual poetry.  By working geometric patterns into both oil and pastel compositions, I am able to portray an Asian appeal while representing man’s impact on nature, whether positive or negative, no landscape remains untouched by humans.  Occasionally a Japanese influence can be seen in my pastels due
to living on Islands in the Pacific as a child.

In 2008, I began showing my pastels in national and international shows.  I have had the honor of becoming a Signature Member of the Pastel Society of New Mexico in 2012 and achieving Master Circle status in the International Association of Pastel Societies in 2013.  The Farmington Museum purchased one of my paintings in 2014.  For the past 6 years, my paintings have been juried into and successfully sold at the Miniatures and More Show, now called “artsthrive” at the Albuquerque Museum.  My work has been in many National and International juried shows with awards ranging from Merit to Best of Show.  My work is in collections around the US, Europe, and Korea and currently is represented by Weem’s Gallery in Albuquerque, and Galleria Tamaya, Hyatt Regency Tamaya Resort, Santa Ana Pueblo.  My work can also be viewed at aldrichgalleries.com.