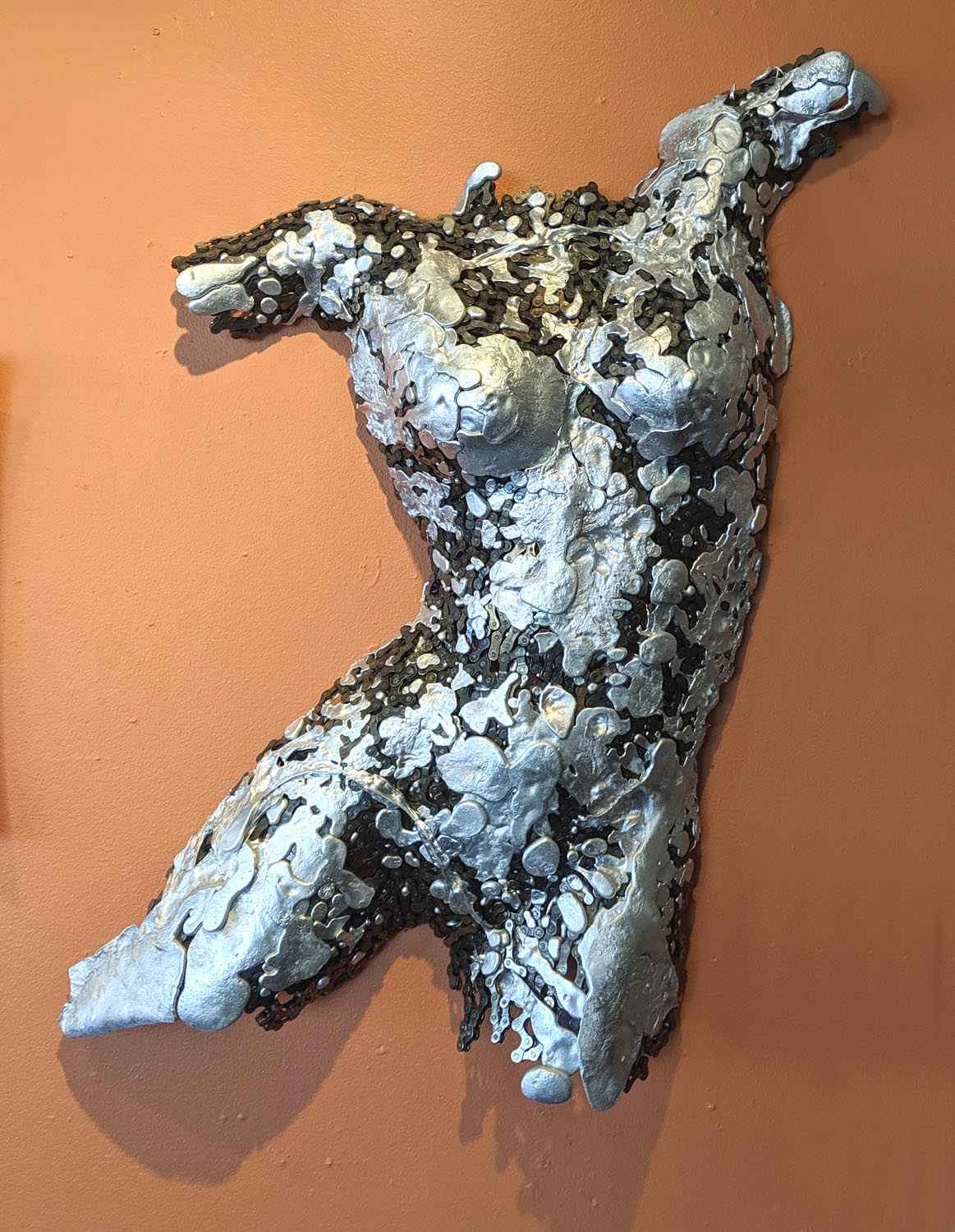 Hard Materials Into Curvy Forms
In 1990 I saw a photo of a stone fountain in an advertisement for a gallery in Santa Fe. I went to the gallery and found the fountains there enchanting, but they were out of my reach financially. I decided at the time that I could make one of those, and shortly after that, I began exploring working in stone. Aside from a continuing education class that consisted of six sessions, I am self-taught. Soon I was making fountains similar to the ones I saw in the magazine. It likely would have been less costly to purchase one than to buy all the tools and materials, but then I would only have had that one fountain, and now not only did I have one, but several, and the tools and know-how to make more. I continued exploring creating in stone, and aside from the globe-shaped fountains and slate containers the fountains were on I primarily kept the work abstract, seeing if I could build on the forms I saw in the stone, without imposing some idea of mine. The exception to this was when for a time after the classes I made bears using different stones, marble, limestone, alabaster, and soapstone.

The human form always fascinated me, seeing in the varieties of shapes the beauty that has attracted artists for millennia. When I retired from the practice of psychology in 2010, I decided I would see if I could approximate the human anatomy, and decided I would first make a form I could work within, from the back or the “negative” space. So I obtained a mannequin and made a concrete mold with it, and then had the “negative” space to work within. The first expressions were crude and were shaped from aluminum foil. They were very fragile and not very satisfactory. Then I began using copper sheet material that was on hand. To shape the copper I needed mallets in the adequate size and shape, and as I could not find what I needed, I purchased a 1935 wood lathe and used that with some hardwood I had in my firewood pile and made some mallets. With those, I was able to shape the copper in the concrete form, and then I taught myself how to braze copper and created the forms that way.

Later I thought to use steel in the creation of human forms and obtained steel slugs from a steel company that stamped holes in industrial steel. Those slugs were placed inside the forms and then welded from the reverse side so when the finished piece was taken out of the concrete form the welds were invisible. Although the sculptures were quite heavy, I liked that medium. However, the slugs became unavailable due to legal issues of the steel company, so I searched for another medium to use. As an avid bicyclist, I thought of using bike chains, so I procured some from bike shops. There is an ample supply of those since when they are changed the old ones are sent to landfills. Again I worked on the reverse side, so the welds were invisible once the piece came out of the mold, and immediately there was a positive response from people who saw them.

Being curious about what people found so attractive about the pieces I asked different people why they liked them and received some different responses. One person said something about the light alternating with dark; another said that the patterns created by the material were attractive, and another spoke about the Yin-Yang quality in the pieces. I suppose the raw materials and processes used are Yang, and the shapes achieved are Yin. Later I came to appreciate that the pieces need to be displayed using spotlights to cast shadows, and the shadows are another manifestation of Yin energy. I invented a bracket that holds the sculpture a few inches from the wall so when a spotlight shines the sculpture casts phenomenal shadows. Someone said something about the lacy texture, especially in the shadows, and a lacy texture is certainly Yin. There are likely many answers to the question about what is appealing about these sculptures. The impressions are subjective and are projected onto the sculpture by the viewer. The words most often used by people seeing these figures for the first time are “unique, original, creative, imaginative.”